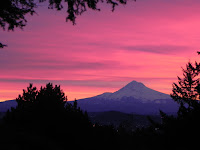 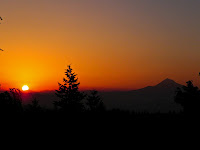 Don't tell Ernest Hemingway, but the moon can put on its own show when it rises. The problem is, most people are watching the sun set or their computer/T.V screen when it happens. Such was almost the case last week for me and my dad. After over 40 years (I won't be too specific) of living in New Mexico, my folks finally joined me here in the Northwest. Dad is also a photography fanatic, I mean, hobbyist, and he and I have often gone on hikes or day trips to photograph whatever we come across. Our styles are different, but we both enjoy finding the unusual in different aspects of ordinary life. And you have to admit, the moon is about as ordinary as it gets. After all, it's not like we don't know what it looks like, right? 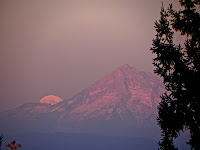 Last Friday was slightly unusual in that it marked the occurrence of a blue moon, usually defined as the second full moon in the same month. But for those of us in the southwest Portland suburbs, it was more than that. Not far from where I live there are several places where Mt. Hood can be clearly seen. This is more  unusual than it sounds when you consider how many trees there are to try to see through, over, and around. Dad and I drove up to the highest point in the neighborhood with the intention of watching the sunset and then waiting around for the moon to rise in the hopes of getting a few shots of Mt. Hood and the moon. I had hurriedly glanced at a moon rising chart online before jumping in the car (sometimes this photography stuff is rather last minute) and I thought it said the moon rise would be about 10 minutes after sunset. 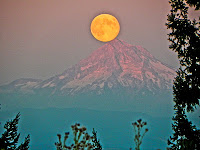 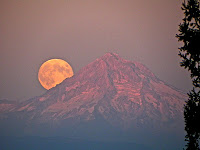 There were several other people in the little park located at just under 1,000 feet elevation. It's a common place for families to walk to on clear evenings to look at the stars or watch the sun go down (after all, we can only see it about three to four months out of the year, but I digress). Dad and I took a few shots during the beginnings of the sunset but were rather disappointed in the lack of color. All of  a sudden, we heard a woman behind us say, "Is that the moon?" We both turned around in time to see the beginnings of a sliver of a disk appearing on the left side of Mt. Hood. It was rather like a school of fish locking on the bait target as the entire group in the park turned and watched the thin sliver turn into a large creamy ball seemingly rolling up the side of the mountain until it was resting on the top. I was mildly surprised that our little group of new best friends didn't break out in applause after it was over. Later on, one of the men made the comment about Neil Armstrong being laid to rest that day. None of us could think of a more fitting tribute than to watch the full moon rising. When we turned to leave, dad and I realized that the sunset had gone on quietly behind us. It had gone down at almost the same time as the moon came up, but this time all eyes were on the moon, and we weren't disappointed.
Posted by Hly at 8:44 PM