You Have to Start Somewhere 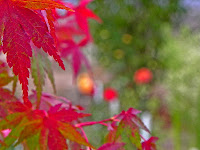 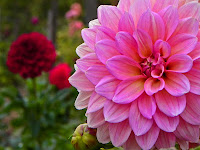 In the past year or so, I've decided I finally know what I want to be when I grow up, a real (as in paid) photographer. I realize I'm a little late in figuring this out, but better now than in 10 years. With that said, I am currently still in the I-support-my-hobby stage as opposed to the other way around. But maybe things are changing. Last Friday, I was able to leave work (as in, a paying job) a little early and head up to Vancouver, Washington for a Scottish Country Dance class. I always get there a little early and usually stroll around the neighborhoods looking for anything of interest. In this particular neighborhood there is an elderly couple that maintains a large garden across the street from their house. I don't know their names, but there was a sign at one point at the garden's entrance that said "Bev's Flowers." I've only seen the man out taking care of the flowers so I'm not sure who Bev is exactly, but I'll just call him Mr. Bev for this story. What I don't know I can make up, right? At the garden's entrance is a small stand, and during the summer it holds fresh-cut bouquets. There is a small cup nearby for people to pay for their flowers. At different times of the growing season he also sells tomatoes and raspberries. I use the word "sells" loosely because everything is based on the honor system. 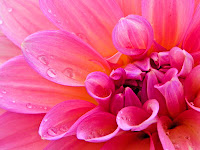 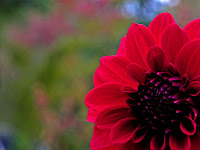 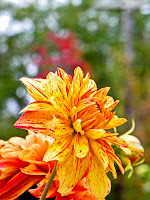 I first met Mr. Bev last July and wasn't sure he would remember me. As I walked into the garden, I could see him methodically watering the dahlias. When he saw me, he greeted me like an old friend, and we were soon discussing the flowers, weather, and what the coming winter might be like. He then asked about my pictures. He said he would be interested in seeing some of them. Maybe the flowers are like his children, since parents always like to see pictures of their kids. I told him that if he liked I would have some prints made and bring them up the next time I had a chance. He said he would like that and maybe we could work out a swap, but in the meantime I could take some of the tomatoes. "Now remember" he said, "anyone can take a picture of a flower, but I can get that out of a catalog. I want to see your artsiest pictures." With that thought, I went to work. It wasn't exactly what I had in mind for my first paid photo shoot, but then again I do love fresh summer raspberries.
Posted by Hly at 9:14 AM