I titled this post "The Continuation" because I never seem to get tired of going to the island; there's always something new to explore. Apparently though, even as often as I've been out to Sauvie Island, it is still possible to miss a turn on the way there and almost end up in downtown Portland. That happened to me not long after I moved here, and I've never quite recovered from almost leading the Rose Parade in my bright red Eclipse. But I finally made it, and parked in one of several designated parking areas along the narrow, windy road. I had planned on walking about 10 miles. That's a little shorter than usual but occasionally one of my feet decides to get grumpy and I have to listen to it whine a bit. I passed these barns on the way to the meadow. There are scads of old barns on the island, all with their own stories to tell. 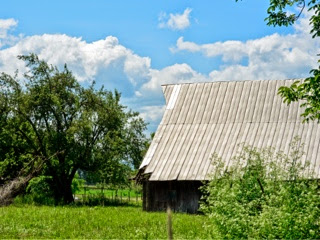 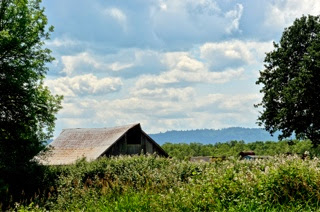 After about an hour, I came to the turnoff and headed back to a slightly more remote area. The only living thing that's usually back here is an occasional picnicker or herd of cows. There are shooting competitions that go on, but they usually take place later in the summer. This time the cow herd was joined by an egret or two, a couple of squawking blue herons (and boy do they make a revolting sound), and a bald eagle. The eagle was especially beautiful as he glided in a circle overhead, as if riding an invisible carousel of wind. 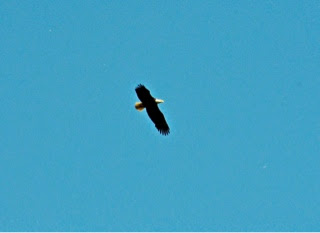 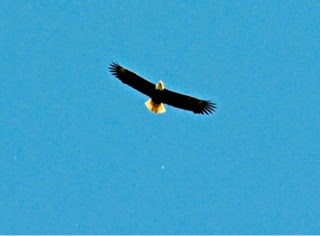 There are numerous lakes on this part of the island, especially this time of year when we're still in the rainy season. The clouds and trees reflecting in the water made for a great dining atmosphere. Even my Cliff bar tasted fancier. I doubt whether any famous downtown restaurants had ambience like this. 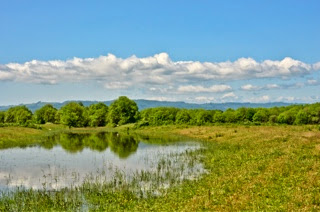 Meanwhile, two males of the bovine population had started a tug of war of sorts. It's a good thing they had been dehorned because otherwise things could have gotten messy. One of the bystanders took a particular interest in me. I just kept walking and didn't make eye contact, other than to quote one of my favorite Bob Hope lines, "Just look upon me as a vegetarian." 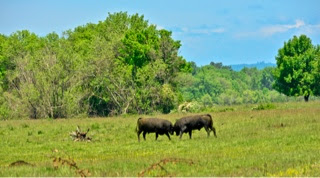 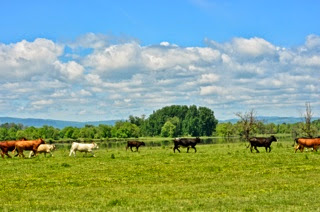 I had looked on Google maps and could see a footbridge of sorts crossing a narrow channel of water and leading to another part of the island. My goal was to find it and then see what there was to explore on the other side. Alas, it turned out that the image on Google was taken in the summer when the water had receded a bit. Having no desire to go wading, I took a picture of the bridge and the surrounding area and headed back. I do think it was worth the walk. 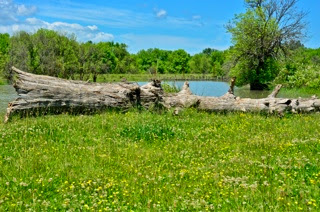 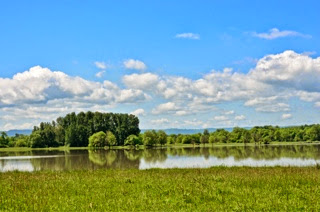 It really is this pretty on the island, almost like one of Burt's chalk drawings from Mary Poppins. Come to think of it, I think my waiter was a penguin. Oh, remember that 10 miles I had planned? It turned into something closer to 13 or 14. That always happens, one trail leads to another and before long, the mileage budget is blown. Oh well, it's still quite an economical way to spend a Saturday.
Posted by Hly at 3:09 PM No comments: