Last week I decided that it was time to take a Friday off work. After all, it had been over a whole month since the last time I'd taken a Friday off so I figured it was time. Besides, it had suddenly occurred to me that after next week the malls and stores were going to be clogged with shoppers. As much as I love shopping (and those of you who know me can attest to this), the week before Thanksgiving suddenly seemed like a good time to get the Christmas shopping that couldn't be done online over with. The fact that the sun would be shining never entered into the equation and turned out to be a bonus. Unfortunately, the wind was also blowing for two of the three days of the long weekend. I have a strong aversion to wind. It must be a leftover hangup from living in the southwest for so long and putting up with what amounted to a sandstorm every afternoon during the month of March. Now whenever I hear the wind howling outside, all I can think of is the blowing dirt and static electricity. 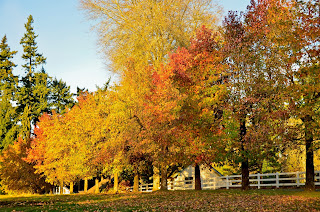 Up here, it's more likely for there to be blowing moss than sand, so I made several forays down the hill to see what there was to see in this unexpected sunlight. One of my favorite areas is not far from home and has old farmhouses alongside newer additions. This area was once an orchard and there is still a large parcel of land in the middle of the neighborhood that, by a covenant or code of some kind, must remain in its natural state. There are pear, plum, and apple trees tucked back here, although the blackberries make them rather difficult to get to. This picture is taken near that now wild orchard. Something else that is rare to see during this time of year is a good sunrise or sunset. The sky and cloud conditions have been nearly perfect these last few days and because my apartment has a southwestern exposure, I don't have to go far to see a great sunset. The biggest trick is not getting hit in the head by a hanging flowerpot. 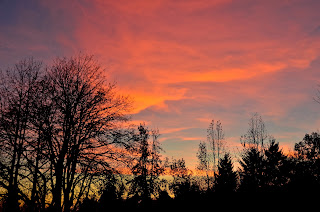 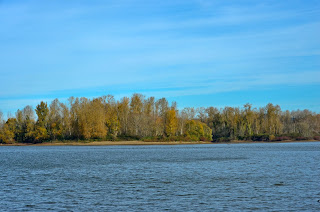 Saturday was much like Friday as far as the weather was concerned. After a nice run, I decided to go for another walk while the sun was still high overhead. Because of all the tall evergreens, it doesn't take long for streets to be completely in the shade. The only problem was that my fingers (which have circulatory issues in the colder weather) had turned white and numb and taking pictures was a bit frustrating. It felt like I was really pressing the button hard on the camera and nothing would happen. It's amazing the difference a little constriction makes in finger strength. However, after a lot of blowing on my fingers and rubbing my hands together, I did get enough feeling in my hands to get a few pictures. There's a lovely path along the Willamette River but right now the water is low enough to walk right along the edge of it. That won't be the case by next month. Sunday was the perfect day. It was chilly in the shade, but in the full strength of the sun it was quite luxurious and there was only the vaguest hint of a breeze. I decided to do a longer version of  Saturday's walk and went back to the same southwest Portland neighborhood. This time though, I walked across the Sellwood bridge and into Oaks Bottom Wildlife Refuge. In the spring there's a purple haze of flowers along the floor of the park but this time of year it's just golds, reds, and browns. It's 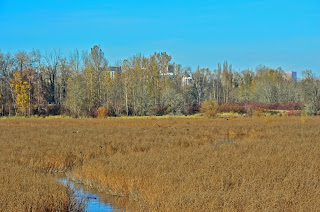 easy to forget that downtown Portland is just a few miles away while walking through this area. If I didn't raise my eyes too high, I could almost pretend there were no high rises peeking over the reeds and bushes. On my way back, winding through the Sellwood neighborhood, I was struck by the number of flowers that were still in bloom. This was the perfect time of day and the sunlight shining through the red was eye-catching. I wish this weather could hang around for a bit longer, say until about June. But I suppose that's asking a bit much. 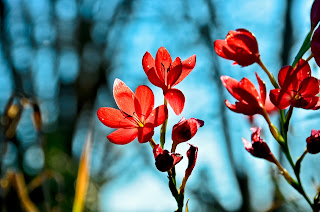 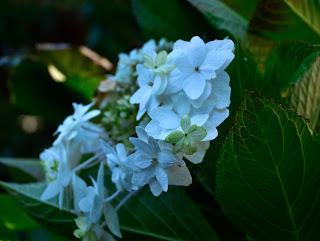 This was taken on the way down to Macadam along a series of staircases that goes from the top of one Portland neighborhood to the foot of the hill. These blooms are going to get a rude awakening in a few weeks.