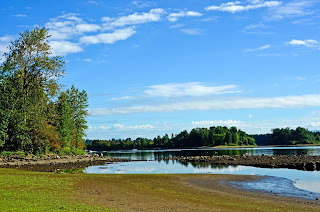 During all the walks and hikes I've taken in the Portland area, there have been a few times when I wished I had a machete in my back pocket, was lost, or just couldn't get there from here. Today was a bit of the former and a sprinkling of the latter. My initial goal was a hunk of what is called Waverly Heights Basalt in the Willamette River (I'm not sure if the basalt is named for the local golf course or the other way around), that is thought to have been formed by ancient lava flows. The current name for this hunk of rock is Elk Rock Island. The island is easily accessible at all times by boat but, unless a person feels like doing a bit of wading, the easiest time to get there on foot is during the summer when the water is low. In the early 1900's, a dance club was situated on the island, and in 1910 Portland businessman Peter Kerr bought the island from the Rock Island Club. In 1940 he donated it to the city with the requirement that it be kept in its natural state for, as he put it, all to enjoy. Kerr's own home was across from the island, resting on a cliff of the same basalt as the island. Now that the history has been laid out, here's what happened. I parked my car on the north side of Willamette Park, because traffic across the Sellwood Bridge has been hideous lately, and the journey is as much the point as the destination. I quickly got distracted in Willamette Park by a trail down to the river that in the spring is nothing more than a place to fall into the water, but at the end of the summer it's more like walking onto someone's lawn. 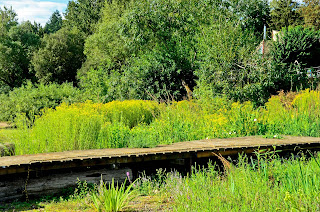 I continued along the riverbank intending to rejoin the trail later. But after about seven or eight minutes, it seemed simpler to keep going until I met with an unofficial trail back to the link between the park and a nearby marina and then the street to the bridge. The slight hiccup was that all the entrances to that link between the park and the marina had been blocked due to the construction going on at the Sellwood Bridge, and I do mean all entrances. I found myself below the wooden walkway that leads from the marina parking lot to the houseboats looking up at the imposing chainlink fences topped by razor wire and thinking maybe I should have turned around sooner. But never one to accept the obvious conclusion staring me in the face, I decided there had to be a way around this. And lo and behold there it was. The gate to the marina parking lot may have been topped by razor wire but that doesn't matter when it's not latched. I made my way through the gate thinking I was home free, only to be faced with a long gate across the entrance to the parking lot. It was the kind that residents have codes to, which did me absolutely no good. I walked around the inside of the lot looking for any kind of opening in the chainlink and, finding none, tried to figure out what part of me besides my arm, backpack, and camera would fit through the narrow gap between the wall and gate. I said a short prayer and right then, a resident returned home and unlocked the gate. He didn't seem distressed to see some potential criminal wandering around inside the area and I told him what happened and went on my way. 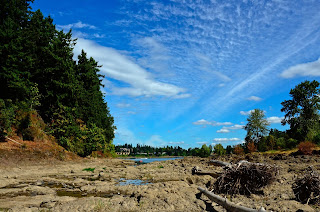 After that, getting to Elk Rock was easy. It was no problem getting on the island as the water from the spring was now no more than a few puddles. Trails criss-cross all through the island and around the perimeter. There were other people there enjoying the sun or the view, but at the same time it was easy to feel quite isolated.

As I headed back, I fell into step with a very nice couple who lived along the Columbia River in north Portland. They had come as far as the trail would let them before running into the island. We chatted until they turned to go a different direction and it struck me that if I hadn't taken so long to get to the island in the first place I would have missed out on their enjoyable conversation. The next time an apparent inconvenience comes my way, I'll have to remind myself that a momentary frustration can also lead to an enjoyable memory. 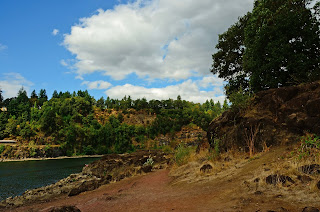