A number of years ago my dad gave me a book called Extraordinary Popular Delusions and the Madness of Crowds. From a title like that, you can tell it's light reading. Written in the mid-1800's by Charles Mackay, it chronicles fads, or manias as they used to be called, that have affected great numbers of people. Mackay chronicles everything from the witch hunts (Salem, Massachusetts had nothing on the Europeans when it came to hunting "witches") to dueling, alchemy, and popular sayings. But the one fad that really stood out to me the first time I read through this book was what became known as Tulipomania. In the 1600's, tulips first arrived in England and they soon became all the rage throughout Europe, and especially Holland. Certain varieties were so sought after that people were willing to trade almost their entire fortune to obtain one bulb, and soon tulips had their own niche in the stock market. One anecdote tells of a speculator so anxious to buy one of only two bulbs of a certain rare variety that he was willing to offer twelve acres of prime real estate, and another potential buyer offered 4,600 florins, a new carriage, two horses (gray), and threw in the harness as a bonus.

Some of the more humorous stories, at least in hindsight they're humorous, involved people who had no idea of the tulip rage that had engulfed Holland. One unfortunate sailor, upon delivering cargo to a Dutch merchant, spied what he thought was an onion lying on the counter and took it to eat with the red herring the merchant had given him as a tip for the delivery. Later on, when it was discovered the rare bulb was missing, the sailor was hunted down and discovered just as he was finishing off the last of the "onion." The poor chap ended up in jail for several months on a felony charge.

People from all walks of life converted their property into cash and bought tulips. The general belief was that all poverty would be stricken from Holland, so rich would everyone be from their tulip profits.

But, like all good manias, it couldn't last forever. For whatever reason, the more prudent in the population began to sell their bounty, and as more and more tulips were sold, a panic ensued so that those who had agreed to buy tulips once worth a hefty sum were now faced with paying thousands of florins for what was now worth only hundreds. The Dutch government decreed that any contracts made before November 1636, when the fad was at its height, were to be declared null and void and any contracts made after that time could be broken if the buyer paid the seller 10% of the previous value. There was of course, quite an economic shock wave across Holland, from which it took some time to recover. There was some evidence of the tulip fad in England, France, and Scotland, but it never had the same impact  as it did in Holland. Now whenever I see a tulip bulb, I think of onions (with red herring of course).
.

Recently I took a trip back home to New Mexico. As an explanation, whenever I'm in Oregon, home is New Mexico and vice versa. It's been very dry in New Mexico these past few years, with the average precipitation falling well below the average. Whenever I lived there, the sand dunes would absolutely shimmer with wild purple verbena throughout the month of May and the verse from Isaiah 35 about the desert blossoming like the rose would always come to mind. This year I was afraid there wouldn't be any kind of blossoms, be they roses or dandelions. But, I was pleasantly surprised. 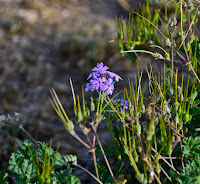 The beauty of the desert is much subtler than in the Northwest where everything is green (even the sidewalks in some places). I had to do a bit of searching and listen to friends ask me where on Earth I was going to find anything pretty to photograph. It's really not that hard, you just have to look for beauty. Maybe it's just part of being an optimist.

Last Thursday afternoon, I went on a walk with a good friend of mine. We decided to go along the edge of the irrigation ditch that runs by her office. I asked her which direction was the most scenic and after she looked at me like I was crazy she said neither direction was particularly scenic so it didn't really matter. In the big scheme of things, she was right. It was so dry and the dirt was like cement under our feet, but every now and then a surprise was hiding behind a rock (and it wasn't the kind with rattles either). The only problem with taking pictures when you're with someone is they don't always know when you disappear behind a shrub or fall to the ground to get the right angle for a flower shot. It's rather amusing to see them abruptly stop talking and look around for you.

Back in Oregon there is no shortage of rain and the flowers are anything but subtle or hidden. On my lunch hour walks they all seem to be saying "pick me, pick me!" One of my favorite challenges is finding blooms with raindrops on them. That may not sound hard, but if they have raindrops on them then that means it's either still raining or threatening to. In either case, carrying a camera around is a bit chancey and often involves me wearing it under my raincoat, which is such an attractive look from the side. I'm not exactly fashion conscious but adding what looks like 20 pounds to my form is something I usually try to avoid. The sacrifices we make for art! This past week the rain was nice enough to wait until after 2:00 to start so there was ample opportunity to capture the last of the magnolia blossoms before they fell to the ground. Friends tell me they are the messiest trees to have because of all the petals that litter the street and, because of their leathery texture, they are rather difficult to sweep up. One of the joys of apartment living is being able to enjoy things like this without the work. But don't tell anyone, it's a secret.

Oregon is prime tulip country and at the local tulips farms it resembles a miniature Holland. I have yet to go to those particular areas, and for now I'm perfectly content with the blooms that dot the local neighborhoods. If you close one eye and squint with the other one, you can almost imagine you are in the middle of a vast field of tulips, and maybe even hear a windmill or two in the distance.