Finally, spring! I know, it's not quite spring yet, but we're closer to it than we are to the first day of winter. Spring surprises come in many shapes. For instance, hearing a mechanical voice outside the bedroom door at 10:30 at night telling you the smoke alarm battery is low is definitely a surprise. I had no idea my heart could beat that hard and still be inaudible. But that's not exactly what I had in mind.

Spring creeps up on you in many ways in the Northwest. Growing up in New Mexico, the month of March would blow in and by the time the dust settled, it was warm and things were blooming. That's not exactly what I would call subtle. But here there are small changes every day, and before you know it the bare tree outside the window is covered in blooms. Or the dark gray sunrises of winter change to a brilliant palette of color smeared across the sky, rather like a three-year old's finger painting without the mess. 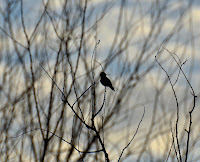 Animals are another fun part of spring. During the winter about the only wildlife you see is the neighbor's dog out for a walk. Granted, a squirrel isn't exactly exotic, but coming around the corner and seeing one perched in a tree posing for a picture is unexpected. He performed quite a nice gymnastics routine on the highbars too before going on his merry way. Then there was the rare black hummingbird. Not really, it's more like the silhouette of a hummingbird. My one complaint (okay, I have many, but for now) is the light this time of year. There is just enough to backlight but not really illuminate. At least hummingbirds are quite distinct, which makes this a more satisfying capture than the ubiquitous blackbirds that dot the landscape. And finally, there's the rain. Yes, it rains in Oregon (surprise!), but after the rain is a great time to be outside. I love finding raindrops on roses (sorry, daffodils) and capturing them before they fall to the ground. Yes, spring in the Northwest is both frustrating and satisfying. One minute the sun is out and the next it's pouring rain. But even with its temperamental nature, spring brings a different feel in the air that is instantly recognizable after a long gray winter.
Posted by Hly at 9:00 AM No comments: