Coyote Wall (aka If You Come to a Fork in the Road, Take It)

Last year I was discussing the merits of Dog Mountain and how much fun it is to hike and see the wildflowers when a friend asked if I'd ever been to Coyote Wall. Of course the first thing that came to mind was a vision of Wile E. Coyote with a never-ending supply of Acme gadgets lurking behind a bush. I had not heard of Coyote Wall, but figured any place with a name like that had to be worth a visit. The only problem with hikes that are known for their wildflowers in the spring, is spring itself. The weather is about as predictable as a butterfly as it flits from bush to bush and equally annoying for photographer types who run along behing trying to figure out just which bush it will flit to next. After a lot of careful analysis (that means looking at about five different weather sites and trying to guess which was the most accurate), I decided to just head east and hope and pray for the best. 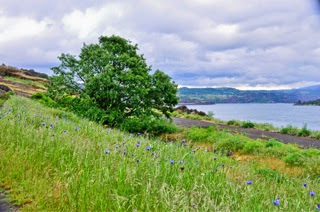 The wall itself is easily recognizable. It's a giant spine of rock jutting out of the ground and sweeping back to the north before curving west. I'm not sure where the name Coyote Wall came from, but there was no resemblance to Wile E. whatsoever. The trailhead was easy to locate since it is an old abondoned highway strewn with sizeable boulders, which probably explains the reason for the abondonment, but it was the next step that was a bit tricky. I had my guidebook with me and it even gave the GPS coordinates for the location of the break in the fence that led to the trail, but it was the bit about taking the faint trail to the left that gave me pause. Everywhere I looked there were faint trails, both to the left and in every other conceivable direction. Because this area is a popular spot for mountain bikers, over the years they have created all kinds of trails and paths across the landscape. 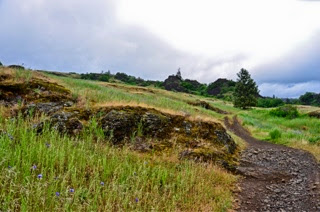 Once I found the correct "faint trail the left," and that took some doing, I was on my way along the rim and up the hill. There is a certain wild beauty about the place. The wind rushes down the mountain and  flows through the grasses with a certain tide-like sweep. It rather resembled pictures I've seen of the moors in England, with the slight variation of a pine tree here and there. 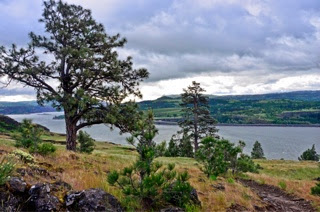 The trail gives way to rock along the rim of Coyote Wall and then picks back up near a fence about half-way up the hill. The trail splits, one path leads east and the other straight up. I went up for a while to get a better view of some wildflowers and then headed back down and to the east. 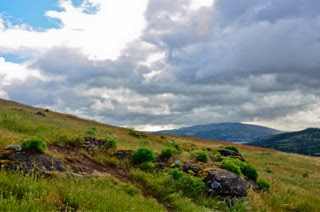 One of the odd things about this hike was that while I was never lost, I never really knew where I was either. I figured if I knew how to get back to the car then I must not be lost. After a while, the scenery changed from wild rocks and flowing grasses to lupines and red dirt. 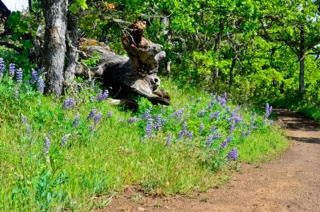 This trail ran along reasonably enough until it split three ways. To be extra helpful, there was a sign saying what uses were allowed on the trails. I chose the middle one because it best fit the description in one of the suggested hikes I had found online. Apparently one four-wheel track looks much like another because when this particular trail ran out, it had a No Trespassing sign in front of it. Someone needs to tell the folks who put the "this trail is open to the public" signs up that such is not the case. I retraced my steps and took the trail to the right. This turned out to be the way I wanted to go but hadn't known it since I wasn't really lost but didn't know where I was going. After crossing a creek and winding upwards, this valley came into view. 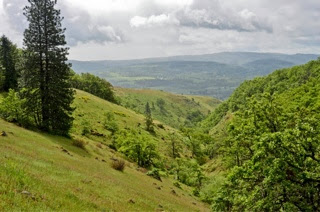 Even though spring weather is unpredictable, the lighting can be fantastic, and the valley seemed to glow right before my eyes. I continued on this way to another trail that ended at Catherine Creek, which was where I had intended to land in the first place. The moral of the story for this hike is that there are many ways to get there, even if "there" is a bit nebulous.
Posted by Hly at 1:20 PM No comments: