During the last few hikes on the Larch Mountain trail, I've passed signs for the Bell Creek Loop hike. The name is somewhat misleading in that it is not a real loop but is really a dog bone with the trail heading straight in, making a large loop, and returning to the original starting point. I suppose "Bell Creek Dog Bone" doesn't have the same ring to it. The total distance is approximately 15 miles. 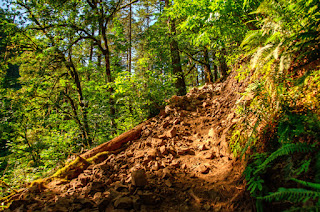 I should have known when I started out and my iPod Shuffle wasn't working correctly that things were not going to end well. Never contemplate a hike without an abundance of Scottish fiddle music handy. However, being intent on exploring a new trail, I ignored the subtle warning and pressed on. The hike begins at the Oneonta trailhead, trail #424, but can also be accessed from trail #400, which is where I began.


That added half a mile to the trip, which seemed a mere triviality at the time but was something I would regret later.

This trail immediately ascends above the old Columbia River Highway and intersects with trail 424, which heads south as it leads to Triple Falls. The picture above shows the repair to the trail after a landslide last fall. 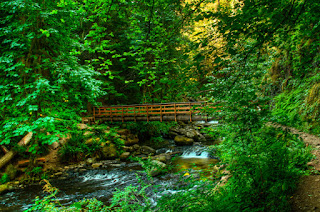 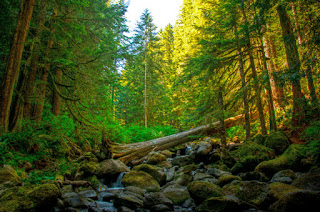 Even at this early hour there were people at the Triple Falls viewpoint. I wasted a few minutes in setting up the tripod and then decided there was no clear shot and continued on. The trail crosses the creek soon after the viewpoint and continues to wind its way upward. Finally, after a fair bit of climbing, the junction with the Bell Creek Loop was in sight. It is recommended to ford the creek in the summer months. I can imagine that after months of winter rains, it would not be a pleasant crossing before May or June. Getting across was actually quite simple, but finding the trail on the other side took a few moments. Of course, it went up. There was a junction marked by a log painted pink at one end that I had seen described by one hiker's online report as the marker for a shortcut trail. I am reasonably certain I saw the beginning of the shortcut trail earlier on, but I have no intention of discovering if I'm right for some time.

The trail continued it's climb up the mountain, and at times the trail was more of a miniature stream flowing down. There was what I will label a false summit about 3/4 of the way up. It was a clump of trees growing on an outcropping of rock, complete with a comfortable stone on which to sit back and look at the beautiful creation below. Then it was time to press on, with the trail passing under a towering mass of moss-covered rocks. There was no real view at what I think was the top, but rather just a large open area surrounded by trees. The trail changed to a dry creek bed, very rocky and requiring eyes on the ground to ensure no twisted ankles. Then it changed to marshy clumps and finally back to a normal trail; just as it ended at a fallen tree. After a bit of searching I found Robert Frosts' original model for the road less travelled and continued on. Things were going pretty well at this point and I successfully navigated the next trail junction. But my luck was about to run out. At the junction of trail 424 and the Larch Mountain trail I failed to see that there was an arrow pointing both straight and to the right for trail 424, and I also did not look at my printed instructions that said to turn right. I only remembered the bit that said to stay on trail 424. And so the trail continued up, causing several outbursts along the lines of "this is insane!" But there were some beautiful rhododendrons to see along the way; something I have not seen on previous hikes. 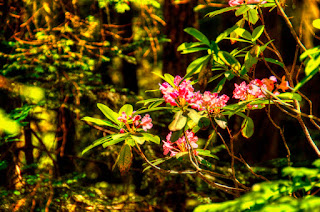 Finally, it was obvious the trail was ending. But instead of being at the junction I was expecting, I was at the break in the guardrail along Larch Mountain Road leading to the trail that takes hikers down to Multnomah Falls (after a quick seven miles or so). There was a couple ahead of me and I lamented that I knew where I was but it was not where I wanted to be. I sadly dragged myself to the beginning of the Larch Mountain trail and started down. My main complaint with this route is that it joins with the Multnomah Falls trail and thus is often packed with casual hikers in flip-flops. Then I remembered that the Franklin Ridge trail intersects with the Larch Mountain trail and decided I would explore that option as it would lead east to the Oneonta Gorge trail and my car. 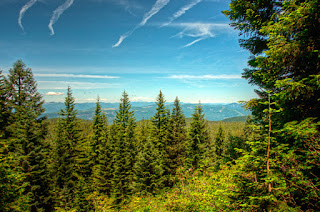 After what seemed an eternity of going down rocky trails, I came to the Franklin Ridge trail and happily turned right, sure that my problems would be over in an hour or so. Hopes were dashed when the trail came to a Y with an ancient sign that at one time bore the words "Franklin Ridge" etched in it. I reasoned that going straight would continue to take me east and, since the other way was south, I should continue straight. Logic does not always enter into navigation. As I made my way down the steep trail, I sincerely hoped I was going the right way and would not have to go back up. The trail ended and there was no sign of any continuation to the Oneonta Gorge trail. Instead, I found myself at a lodge. Two teenage boys were sitting near a viewpoint and they told me this was the Nesika Lodge, which I had never heard of, and that it was possible the woman inside had a map and could point me in the right direction. I knocked on the door and a short, cheerful woman invited me in. She got out a handful of maps but did not have one with the right trails on it. She then drew a rough map on a sheet of paper and told me exactly where I needed to go. At this point I was quite annoyed at myself and I hope she knows how grateful I was for her help and was not frightened by my wild-eyed look of despair at the thought of returning up that hill. Back I went for what seemed an interminable time. I was on the verge of turning back to the Larch Mountain trail when two hikers came along from the other direction. They had come from the trail junction I was seeking and assured me it was "only" about another half mile. Meanwhile, I took the picture above at a viewpoint that I would otherwise have missed. 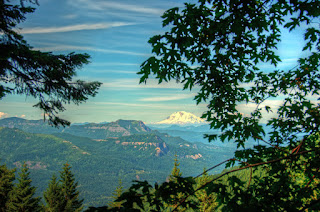 This picture was taken while I was making my way to the Oneonta junction. I figured I might as well take advantage of being where I didn't want to be. Besides that, I found some orange  peel on the ground and for some reason felt reassured to know that other humans had been there in the past six months. Once I found the right trail, I realized I had been on it before and thus was really going the right way. Unfortunately, it was another four miles or so and as I got closer to Triple Falls the trail was rockier and required more diligence to those of us who are prone to twisting ankles. Finally, I came to what I had labeled in my mind as "that bloody bridge" (too much British television), and then to Triple Falls. I came to the junction with trail 400 and was heartily wishing I had parked here instead of the half mile farther west. But once I was on the lovely asphalt, it was much smoother sailing. My heart skipped a beat when I arrived at the parking area and didn't see my car. As I got closer, its red spoiler could be seen peeking over the white car next to it. I refrained from bursting into song and instead said a hearty "Praise the Lord," tottered to the car and fell in. It's times like these I wish I had an automatic transmission, but suffice it to say I made it home and thoroughly enjoyed a shower and dinner, not to mention that I had shattered any previous mileage records I may have set before. The only thing is, I have no desire to try to break this one any time soon.
Posted by Hly at 8:15 PM No comments: