The Many Faces of January

As Januaries go, this one hasn't been too bad. Granted there has been plenty of gray weather, but when you consider how January tends to treat much of the rest of the country, those of us in the Northwest have gotten off pretty lightly. For some reason, the random fact that January is named for the Roman god Janus popped into my head today. I was correct in remembering that he had two faces and it struck me that, considering how suddenly the weather can change in January, two-faced is a very apt description. Just because it looks like a cloud has taken up habitation in one area, does not mean it looks like that just up the hill. From certain vantage points, a sea of fog with just the tallest trees peeping out into the morning sky can be seen. Down the hill to the office is only a few miles, just enough time for the fog to leave its mark on anything stationary before drifting on its merry way. The fog also let the moon break out on occasion. Every time I see a full moon on a foggy evening, I can't help but think of the poem "The Highwayman." The opening lines "the moon was a ghostly galleon tossed upon cloudy seas" always pops into my head.

Not content to let too much sunshine filter through, in case people start complaining about global warming or something, there were plenty of days that left me desperate enough to photograph the raindrops on the moss. Yes, that desperate. I was focused on one particular droplet when I felt a bump against my legs and saw a rather enthusiastic black dog of some variety pleading with someone, anyone, to pay attention to him. His owner came up a few seconds later and asked, in a rather 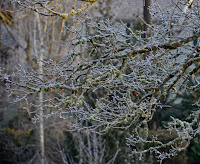 concerned-but-trying-not-to-sound-like-it voice if I was photographing the neighborhood. No, I replied, just the droplets on the moss. Moss? she inquired. I for all the world wanted to say, "yes, you know that green stuff that is draped over every single tree in Oregon, north side not withstanding" but considering she was gathering up her dog and backing slowly away, I decided to just continue on and not make any sudden movements (okay, she wasn't really, but that's what it felt like she wanted to do). No sense scaring the locals if it's not necessary. And it would have taken too long to explain that if you zoom in on the droplet, the house on the other side of the street is perfectly reflected, albeit upside down.

One of my favorite places to go for views and to pretend I'm in an English garden, instead of a few miles from downtown Portland, is the Bishop's Close. The property was once owned by a Portland businessman in the early 1900's, and after his death was donated to the Episcopal Diocese of Oregon. There are river and mountain views as well as several winding trails that take you up the side of a small embankment looking down on a large open area. January isn't usually a good time to explore the gardens, but this particular day fell into the sunny half of the month and since it is Oregon the lawns are always green. I had to time this so as to avoid getting the riding lawnmower in the shot. Somehow, a modern-day piece of equipment just didn't go with the atmosphere.