Weekend Music for the Eyes and Ears 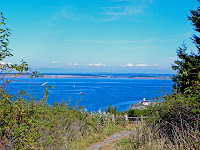 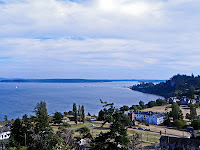 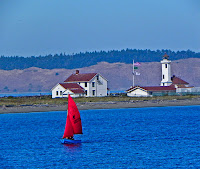 This past weekend was my second trip to Ft. Worden State Park near Port Townsend, Washington (which is nestled on the edge of Puget Sound). The Scottish Country Dance group in Seattle holds their annual workshop and ball at the fort, and dancers from the U.S., Canada, and even Australia, arrive on Friday afternoon ready for a weekend of dancing fun. The group I travel with stays in Officers Row, which is like stepping back in time and always makes my modern apartment look rather shabby in comparison.

The dancing of course is the main draw, but there's a tiny part of me that loves the photo stalking opportunities almost as much. Construction on the fort began in the late 1890s. Ft. Worden, along with two other nearby forts, once guarded the entrance to Puget Sound. The picture above on the left was taken from a hill on the north end of the fort overlooking the parade grounds and Officers Row to the south.  Obviously this place is just running over with pictures to be taken. My goal this year was to capture the sunrise. The main obstacle was getting out of bed early after an evening of dancing that didn't end until after midnight. But since sunrises are more memorable than dreams, I set my alarm for 6:30 and tried to fall asleep as quickly as possible. When I woke up and looked out the window, the sky was beginning to lighten and I was afraid I had once again misread the sunrise table and blown my chance. I grabbed shoes, jacket, and camera and squeakily went down stairs (I'm convinced they made those stairs creaky on purpose so no officers tried to leave unnoticed at night). 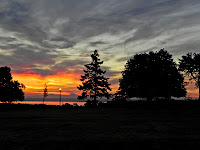 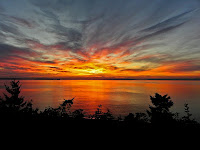 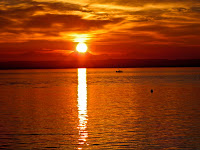 Once out the door, I limped across the parade ground (we danced a lot on Friday night) and was crestfallen (I love that word!) to see what looked like the sun coming up out of the midst of the most beautiful clouds I can ever remember seeing. But after a moment, I could tell it was merely the old fashioned street light glowing in the distance. Breathing a sigh of relief, and with my foot now in a happier mood, I ran across the parade grounds to the top of the small bluff that overlooks the beach. The sun was still some time from arriving, but that didn't prevent what was like a symphony for the eyes from playing out before me. As the sun made its way up, the range of mountains was silhouetted against the morning sky and the ferry boats and various other small crafts made their way across the golden path that started to spread across the water. At that point, I decided the pilots of those boats had the best job in the world (probably not the case from November to late spring) and I hope they were able to enjoy it. After about half an hour, the symphony was over and it was time to return to the happy reality of dancing. Walking back to Officers Row, I spotted four or five deer meandering across the parade grounds. They have little to no fear of humans. One doe (I assume it was a doe because of the lack of antlers) was busy snacking on the growth around a small tree. A jogger was approaching and she seemingly took no notice of him but continued to happily munch away. 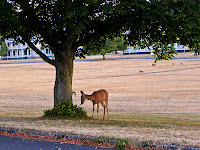 There's one more landmark of Ft. Worden I'd like to mention before I finish this post: Alexander's Castle. It's called a castle but it's more like a half castle. Built in the 1880s, it's the oldest building on the park grounds. It was built by the Reverend John Alexander and was designed to resemble the castle structures in his native Scotland. According to legend, he built it for a prospective bride, but when he returned to Scotland he found that she had married someone else. He returned to the U.S. and lived in the castle alone. All I can say is, that bride sure missed out on a lot of beautiful sunrises. 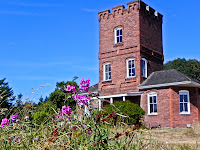 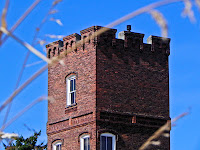