After living in the Portland area for eight years, I decided it was high time to visit the Wooden Shoe Tulip Farm in Woodburn. Each year the tulip festival is held from the end of March to the beginning of May. There are daily activities and huge fields of tulips to wander in. 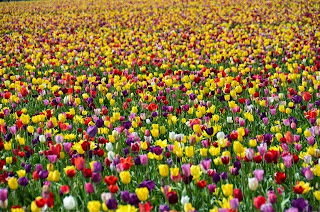 Woodburn is about 35 minutes south of Portland so it's not like it's a long way to go, but the two main reasons I've never gone are the entry fee of $10 a car and the crowds. Those who know me know that I have made saving money into a game, as in "what's the cheapest way to do X." The fee for bicycles and motorcycles was five dollars and that seemed more reasonable. I hate finding a parking place in crowded lots, so I found a shopping area about six miles from the festival and decided to combine exercise and photography. After an argument with my GPS (I won), I found the shopping area, parked the car, and set off. One of the other reasons I decided to walk (besides having grown fond of the money in m pocket) is there are always things to see along the way that would be missed while driving. 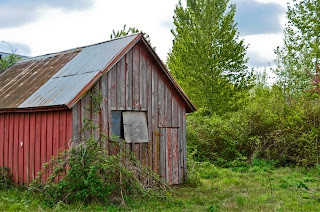 There were several old barns and vineyards that caught my eye, and even some bison. Except for the cars whizzing by seemingly not paying attention to the scenery, it was a nice walk. 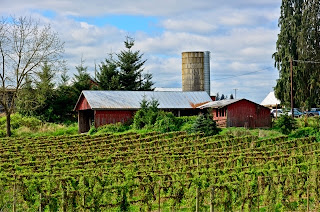 This was a sign at a local farm, one that I could easily appreciate! 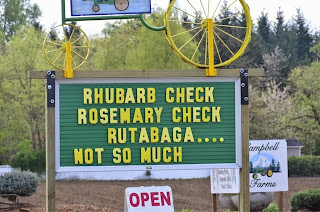 There was a long line of cars making its way to the farm and it didn't take me long to realize I was glad I was walking because at some point all those cars were going to be driving back and the thought of it made me claustrophobic. I made my way to the parking lot and asked the woman directing traffic if there was another place I could pay to get in. The idea of wading through all the traffic to the entry booth didn't appeal to me much. The woman directed me to the gift shop and I made my way there and asked how much it would be to get in. The woman behind the counter was a bit stumped and asked someone else what they thought. Apparently, no one else has ever walked in (or if they have, they didn't make their presence known). After a few seconds of deliberation, the woman said not to worry about it. That sounded like a good deal to me so I made my way to the tulip fields. Not ever having been there, I had no idea what to expect. 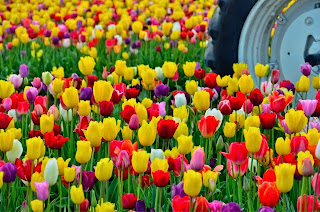 The fields looked like an enormous banner painted on the ground. Next to the splashes of muliple colored blooms, followed row upon row of red, yellow, purple, and white. Joseph and his coat of many colors would have disappeared in the swirling rainbow. 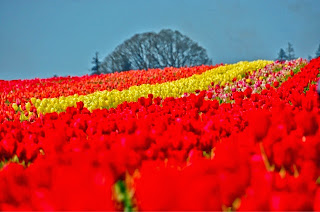 Part of the fun was taking a picture without including someone's head or hand. It rather resembled a game Atari might have come up with, except instead of shooting the space ships, the object was to shoot between them. 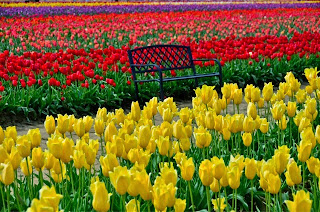 There's something addictive about beauty. No matter how many pictures I had, I just had to take one more. The result of course was numerous shots of almost exactly the same thing. At least pictures aren't high in calories. 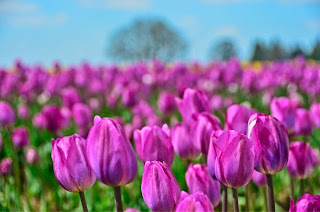 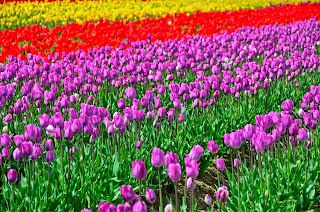 After about an hour, which went by in a surprisingly short time, I headed back to where I had left my car. By now, the two miles from the farm to the main road was a solid mass of cars. The trend continued after I turned onto the state highway and the train of cars snaked its way back for at least another three miles. Four different people asked me if I knew what was going on or where the wreck was. My favorite car contained a happy looking octogenarian who waved at me as I walked by. She didn't seem to mind the wait as she took in the slowly moving scenery. Before long, I was back to one of the barns I had passed earlier. 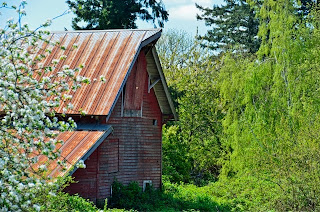 Surprisingly, things sometimes look different on the return trip. There's probably something philosophical in that statement, but since a picture is supposed to be worth a thousand words, I'll let it do the talking.