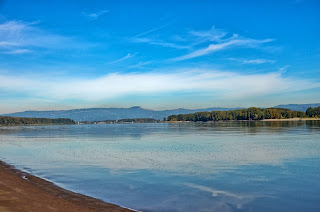 Yes, I know, Virginia Woolf already wrote that story. But in this instance I really was trying to get to a lighthouse, just without all the angst associated with the other story. One of my favorite spots in the area is Sauvie Island. It has a small lighthouse on an equally small outcropping of rock called Warrior Rock. The story goes that in the late 1700's a British Naval expedition landed on Sauvie Island and was greeted by warriors of the Multnomah tribe. There was some trading between the two groups, and the point where they met was called Warrior Rock to commemorate the occasion. The lighthouse, Oregon's smallest and one of only two Oregon lighthouses not on the Pacific Ocean, guides river traffic on the Columbia. I have had several past attempts at hiking out to the lighthouse and Friday's adventure was yet another failed attempt, but at least this time I actually caught a glimpse of it. With a little imagination, the lighthouse can be seen at the end of the line of trees on the left in the picture above. Well, with maybe more than just a little imagination. 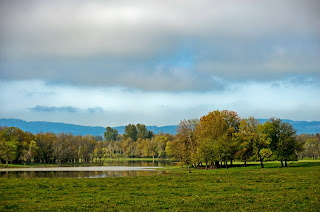 I had decided that the first sunny Friday in October I would take a vacation day  to capture some fall colors. I was hoping it would be a little later in the month when there was more color, but when you live in such a temperamental state you take any sunny day you can get no matter when it comes along. So when this past Friday was predicted to be 70 and sunny, I put in my vacation request. When I left Portland around 9:30 in the morning it was almost clear. As I got closer and closer to Sauvie Island, it got cloudier and cloudier. I was not amused. I parked at one of the designated areas and started walking, looking for any sign of blue sky in the middle of all the gray. Finally, about noon, the skies started to clear. I sat on an old fallen tree eating carrots and humus and thoroughly enjoying the scene before me. 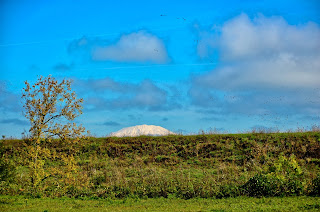 This particular part of the island has little traffic, especially this time of year, and each time I've been there it has the feeling of walking through a landscape painting or a picture in an old story book. This area has a trail that runs roughly parallel with the main road and then intersects it at a point where the other road turns to gravel. I was heading for this intersection and just happened to look over my shoulder to see a mountain peering at me over the canal. 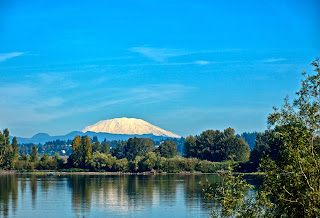 Once the two roads intersect, it's a long straight walk to the trail head. There are numerous signs for Collins Beach along the way, which is a clothing optional spot. I was half tempted to jump out of the underbrush with my camera aimed at any unsuspecting sunbather just to see if I could get anyone to scurry away to take cover, but I decided I better not. After passing numerous cows and old barns, I finally found my way to the beach. I was going to take the trail out to the lighthouse and follow the coastline back but there was some trail construction going on so I decided to go out and back the same way.

Mt. St. Helens, Mt. Adams (I just found out that the mountain I'd thought was Rainier all these years is actually Mt. Adams), and Mt. Hood were all out with their fresh layers of snow. I thought this time I would make it all the way for sure, but alas it was not to be. The beach soon became a sea of mud and the trail was almost as bad. I could feel my shoes being sucked off my feet and decided it would have to wait yet again. I'm sure the lighthouse isn't going anywhere soon and it will give me another excuse to drive back to the island next summer or spring. 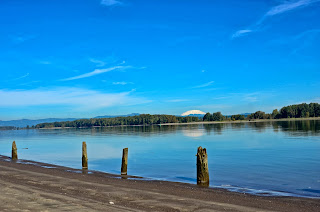