One of the things I've come to appreciate about the Portland area is its diversity, and I don't mean the politically correct version of the word that is so popular now. By diversity I mean all the different areas you can visit in one day within about a three-mile radius (in this case, forest, city, and island). This past week has been absolutely perfect as far as weather is concerned. Summer normally doesn't come until July 5, but at least for now it's here in full force. Since there was no reason to wait for the clouds to clear or the sun to come out, I headed to northwest Portland early on to begin an urban hike. I drove across the St. John's Bridge and parked in one of the neighborhoods across from Cathedral Park. Driving across bridges takes no time at all, but walking back across is another story. The St. John's Bridge is no exception, but at least it's got a pretty view on the way.

From up here, it was very easy to see Mt. Hood wreathed in clouds behind the Steel Bridge, as if it just couldn't quite step out of its comfy white cloak. After crossing the bridge, I found the steps that lead up to the Ridge Trail, part of the Wildwood Trail system that makes an approximately 40-mile loop through Forest Park. There were glimpses of the bridge through the trees, and it didn't take long to be almost level with the Gothic spires. The trail wound its way up for some time (much farther and twistier than Google showed, how surprising!) until it joined Leif Erikson Drive. The word "drive" is misleading because really it's a wide dirt multi-use trail, as in bikers, runners, dads with strollers, probably even unicycles at times (the bagpiping Gandolph can't always be riding in downtown, right?) so there was plenty of traffic to keep one from feeling too lonely. There are also well-placed maps at different junctions to keep hikers from getting lost, well usually. There was one intersection where the signage was particularly unhelpful and it does no good to look for moss on the north side of a tree because moss grows on all sides and surfaces. 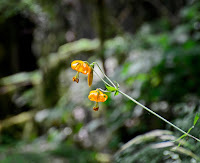 Enough sunlight does filter in to allow certain varieties of flowers to grow. I have no idea what the flowers on the left are, but they rather remind me of inflated turbans. Columbine also makes an occasional appearance, and it's almost always in this red and yellow combination. At times the trail had rather a Shire look to it. If it wasn't for the posts on the side of the bridge, you could almost imagine elves (and yes I know, elves aren't technically in the Shire) making their way over the stream and tripping lightly up the steps, as opposed to hobbits who don't do anything lightly with those hairy feet.

I took a wrong turn here and went up the steps because I've learned in the past that when in doubt, go up. This time the "up" trail appears to have been a shortcut to the back side of one of the businesses along Highway 30. I retraced my steps and went along the trail that paralleled the stream. It was then less than a quarter of a mile back to the highway and along the raised sidewalks that are part of what used to be the community of Linnton. From what little research I've done, Linnton used to be a thriving town. That changed when the highway was widened and the roadside businesses became level asphalt. There are still some homes dotting the landscape and businesses along the east side of the highway but apparently it never recovered its past glory. One of the things left behind was a series of staircases and raised sidewalks that allowed the townsfolk easier access to bus stops and businesses. Those are on the agenda for a future hike.

It was at least a mile or so back to the car and on the way I explored the block-wide farmers market on the east side of the St. John's Bridge. There was everything from local berries to salsa and tamales and crepes. Good thing I didn't have any cash or I might have spent it.

Next it was off to Sauvies Island to pick berries. This past week, a co-worker mentioned that her daughter and boyfriend had picked berries at Sauvies Island Farms and that at $2 a pound, the berries were much cheaper than those at the farmers market. I'm not sure if the cheapness factor holds up when you calculate gas, time, and effort, but it was still a fun way to spend the afternoon. The island is connected to the highway by a bridge that crosses the Willamette River. Along the river are houseboats and the area is dotted with farms. I usually leave my car at the park and ride and walk along the road to whatever the destination is. It always feels like walking in a postcard, that is if you ignore the cars that whiz by on their way to the local beach. The clouds were just beginning to clear from the mountains and the fields of flowers made a great foreground. The sprinklers were an unfortunate distraction but you can't arrange real life very easily.

After about a three-mile walk, I was at the farm. A lady at the entrance was directing people to the proper fields and giving out cardboard flats to hold berries. The road to the berry patch had a view of Mt. St. Helens and flower patches along the way. Lavender, daisies, hydrangeas, and lilies were growing side by side waiting to be picked and turned into a bouquet. After passing corn, cabbage, kale, and other veggies, I finally found the raspberry section. The berries were the size of medium strawberries and were growing in abundance. It was no time at all before my container was filled and it was off to the blueberry patch. Again, the berries were huge and picking berries in a civilized field was quite a pleasant switch from picking thorny blackberries on the side of the road.

On the way back, I was struck again by the beauty of Mt. Hood with the flowers in front of it. Ignoring the idea that I should put my cardboard flat loaded with three plastic containers of berries down before taking the picture, I tried holding the flat and taking the picture. Let's just say, it didn't work. I was down on my knees picking up blueberries when I looked up and realized this was actually the best angle for the picture. Someone on their hands and knees picking up blueberries and then taking pictures probably looked pretty crazy to those driving by, but if I ever see those people again they won't recognize me anyway so it doesn't matter.
.