The Eagle Creek Falls trail hike is one I've done before, but certain trails quickly become old friends that you want to revisit each year. The trail head is about half a mile from the parking lot, but this year my curiosity got the better of me. There is a mysterious staircase that appears near the exit ramp that leads to the parking lot. The staircase connects what used to be the original Columbia River Highway with the highway-turned-bike path that runs along Interstate 84. I decided that this year I was going to explore the stairs before starting on the hike. In my research with Google maps, it appeared I could take the stairs to the old highway and would eventually find a trail that would take me the back way to a footbridge that crosses the creek. That would then spit me out near the trail head and both satisfy my curiosity about the bridge and give me a different way to the trail head. I went up the stairs and continued following the old highway until I passed a sign for a trail that seemed to be going in the right direction, so seeing a fork in the road, I took it. After a bit, the trail came to another junction, but I continued on the original trail. That's where I made my mistake because after another five minutes I started to get the feeling of déjà vu all over again and before long I was back on the old highway. I realized later that I should have turned onto the other trail at the junction and that would have taken me to the bridge. Well, there's always next time. 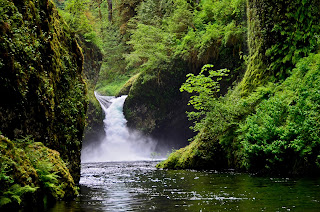 Eagle Creek trail is fairly level, which is one of the reasons I like it, and for the first two miles is made up of mostly packed dirt with a loose rock here and there. Eagle Creek is actually a tributary of the Columbia River and hosts a number of waterfalls along the way as the trail runs parallel with the rushing water. I think the word creek is rather misleading because it has all the sound and speed of a serious river. The first waterfall on the way is Punchbowl Falls. The trail to Punchbowl intersects with the mail trail, but the junction is easy to miss, even with the great signage at about a foot above eye-level. From the riverbed, the falls is around a corner and to the left. Depending on the time of year, it's very easy to walk out on the rocky "beach" to get a look at the falls. However, a week after one of the rainiest Mays on record is not the time of year to do that. Let's just say I spent some time dumping water from my shoes and wringing out my socks, but it was worth it.

I often wondered why it was called Punchbowl Falls because, frankly, I've never seen a punch bowl in the shape of a waterfall. However, this time I did a little exploring after finding a non-official trail that led down to a ledge overlooking the top of the falls. From there, it was easy to see the perfectly round bowl that the water flowed into and then the name made sense. The picture below and to the right looks through the gap and into the area where the picture of the actual falls was taken. The sound of the water was so loud but at the same time relaxing. There are several campsites along the river and going to sleep while listening to the churning water is my idea of a perfect vacation. 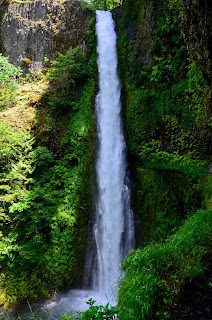 Punchbowl Falls is only about two miles in, and my next goal wasn't until mile six. Meanwhile, the trail went from broad and smooth to narrow and rocky (this rather reminded me of the part in Pilgrim's Progress where Christian would much rather walk on the smooth trail that appeared to parallel the rocky trail he had been told to stay on). At times, there are thick steel cables firmly fastened into the rock to give anyone who might have a touch of dizziness or slippery footedness a way to reestablish their balance. But it's also at these places that the view is the best.

Tunnel Falls is right in the middle of such a section of trail. The water thunders over the cliff and down 130 feet with a force that is absolutely amazing. It's called Tunnel Falls because the narrow trail leads through a tunnel that was carved into the rock behind the falls. In the picture on the left there can be seen, with a bit of imagination, a little "Hobbit hole" to the left of the falls and about half way down. It's reassuring to have the cable here because this is often a somewhat crowded section of the trail as everyone lines up to take pictures and becomes totally oblivious to everything else.

The next "favorite" has at least two names: Crisscross Falls, Twister Falls, and probably others I don't know about. Either one will do. It's actually higher than Tunnel Falls by about 10 feet but because the trail is above it, it doesn't seem that the water is falling so far. It's quite easy to stand right at the top of the falls without any fear of falling in and snap away with the camera. At least, that's what someone told me. The rainbow dancing on the edge of the water immediately caught my eye, and I was quite thankful that the camera could sense it. I've never been to Hawaii, but I always picture rainbows in the water there and I'm glad I didn't have to go so far to see them. I hovered around this spot for a while, just taking in the wonderful noise of the water and feeling the warmth of the sun before starting the seven-mile trip back. I admit to complaining about the rain every now and then in the Northwest (okay, I complain a lot about the rain in the Northwest) but being able to stand on the edge of a waterfall and only be 45 minutes from civilization makes up for all those gloomy wintery days.