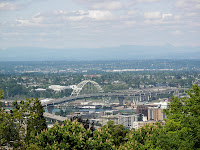 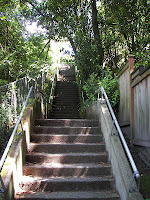 One of the fun things about moving to a city you know absolutely nothing about (and this may be the only fun thing about moving to an unfamiliar city) is the exploring you get to do once you've gotten over the shock of moving. Because I didn't have a job when I moved to the Pacific Northwest, I spent my days online searching for work and in between submitting resumes and unpacking, I did a lot of walking. Since I didn't know anyone, it gave me something to do and helped me learn my way around the area without having to spend money on gas. 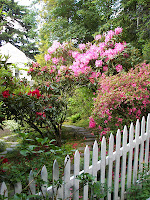 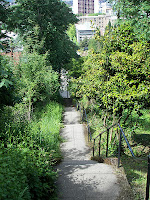 After I conquered my town, I moved onto bigger things: Portland Neighborhoods. Now, something to understand about the Portland neighborhoods is that the majority of them, at least on the west side of the Willamette River, seem to make a concentric circle as they climb to the top of the various hills overlooking the city. Back in the day (as in the early 1900's) the city was connected by street car. The easiest way for people who lived at the top of the hill to make it to the street car lines below was by staircase. This street car/staircase connection is still evident by the number of bus stops at the foot of a number of staircases. 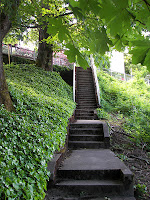 I first discovered Portland's staircase history after reading  a short book by Laura O. Foster called, oddly enough, The Portland Stairs Book. The book has detailed instructions for four different routes (one for each quadrant of the city) and also lists the staircases by location in the back. Armed with my book, GPS, camera, and trusty iPod, I have spent many a weekend in various Portland neighborhoods in search of staircases. Now, not all staircases are created equal. Some are over 100 steps while others are quite short. There's one in NW Portland that has benches half-way up, no doubt put there by someone with a sympathetic nature. Others travel past beautiful yards lined by picket fences, as seen in the picture above.

One of the more rewarding aspects of exploring neighborhoods is going down a dead end and finding either a trail to another dead-end street or a staircase. This seems to happen at least half of the time, which is good because if there's anyone out in their yard I always feel rather ridiculous traipsing past the "Dead End" sign, going down to the end of the street and turning around and going back out. Some staircases will put you smack dab in the middle of someone's yard, like the staircase on the right, but the homeowners don't seem to mind as long as you stay on the garden path.

At times, you also encounter how people have a sense of humor about the amount of effort it takes to get up the stairs. One particularly long staircase had a spray painted saying on it referring to the great effect climbing stairs had on one's backside (backside of what I'm not sure since all you want to do after running stairs is to sit on it). On another long, multi-flight staircase, some sadistic soul numbered every 50th step. As if I felt better knowing I was on stair number 189.

While I've done a lot of the staircases in Portland, I still have a number of them to put together into a Saturday hike. That's another nice thing about the northwest, there are plenty of options for climbing, whether it be stairs, trails, or rocks, to see a mountain view. 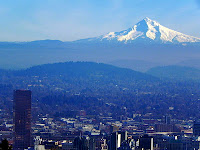