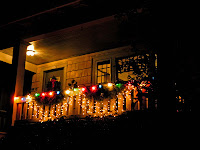 My, but it's been a long time since I posted anything. An onslaught of dreadful weather and various camera and computer issues have resulted in a lack of creativity and source material. I mean, who wants to look at something as exciting as pictures of my houseplants, since that's about the only foliage that is readily available to photograph. There have been some winged visitors on the deck polishing off the stale pretzels left out for them, but the rain has a tendency to turn them (the pretzels, not the birds) into an unrecognizable mush that even crows turn their beaks up at in haughty refusal. 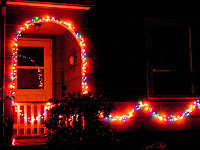 All that to say I've missed writing and having something to write about. Which leads me to Christmas. I'm not crazy about winter, but I love Christmas. And for whatever reason, Christmas needs to be at a cold time of year (believe me, I went through a number of warm Christmases growing up in New Mexico and it's not the same). Maybe it's so we can enjoy those sweaters we all get as gifts, or because hot chocolate, old movies, and a roaring fire just don't seem quite right when it's 80 outside and the air conditioner is running to offset the above-mentioned roaring fire. I also love the decorations (as evidenced by the amount currently stored under my bed). 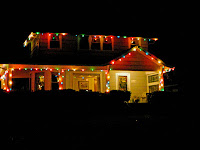 One of the methods of decorating I love the best is the use of light. Be it candles, lighted tree toppers, trees festooned with lights, or houses lit up with anything from one to countless strands, light is everywhere. Whatever the technical or historical reason behind it, couldn't there also be a secondary reason, an echo of something found in Scripture? 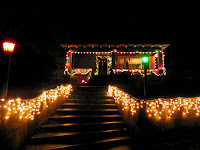 I know the popular theory of the past few decades has been that the 25th was borrowed from a pagan
celebration of the winter solstice and Jesus wasn't born in December.  But what if He was? I heard a sermon recently where it was pointed out that the date of Christ's birth was set at December 25 in the second century, soon after the church began, whereas the idea of it being a ripped off pagan holiday came over 1,000 years later. Some researchers say that the celebration of the Birth of the Unconquered Sun was started after Roman Christians had already recognized that date as Jesus' birthday. 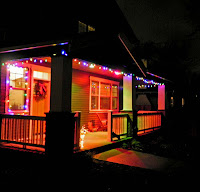 Other articles place the birth of  Christ by figuring out when Zechariah would have served in the temple and subsequently using the birth of John the Baptist to calculate when Jesus was born. Some articles say sheep would never have been on the hillsides in the winter and other articles say they would. Be that as it may, my favorite argument has to do with the solstice itself. It's almost so obvious, it's easy to miss. It goes like this:
One day it's the darkest, shortest day of the year, and soon after, the Light of the World is born. 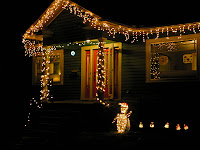 Not too long ago I was walking along the beach with a friend and we were watching the sunlight dance across the water. The topic of Christmas lights came up and she made a comment about how entrancing it was to watch them and maybe that was what Christmas was all about. I didn't realize at the time how right she was. Christmas is about light, it's about the Light that was born for the salvation of all mankind. Merry Christmas, everyone.