After living in Oregon for almost nine years, I've finally had several opportunities in the last few months to explore what is less than 80 miles from my doorstep. A friend at church also loves to hike so, after arranging a shuttle to drop us off and pick us up at the end, we started off on the Cape Falcon to Neahkahnie Mountain leg of the Oregon Coast Trail. We started by revisiting Hug Point, since the last time we were there it was fogged in. 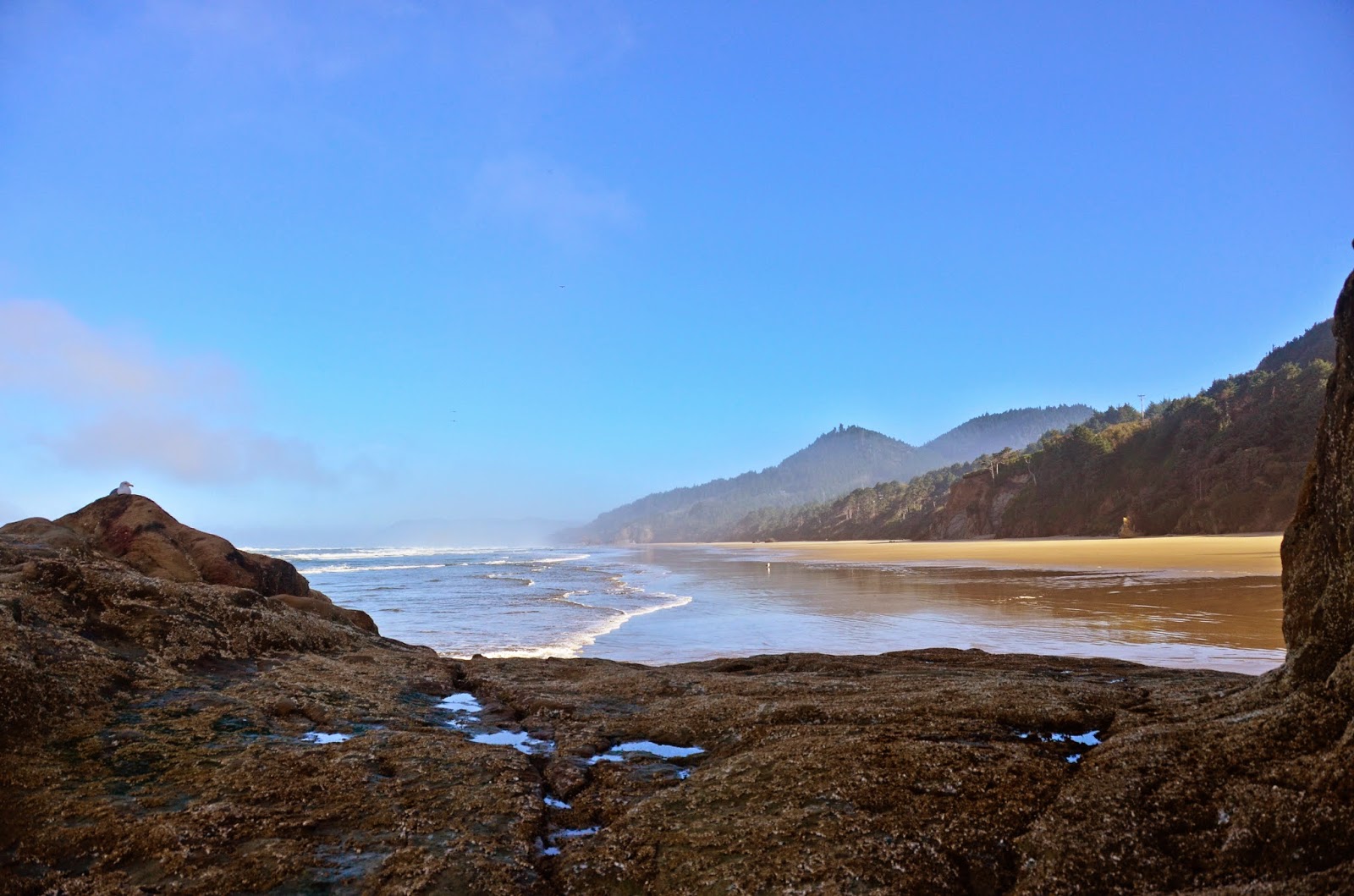 Back in the day, horse-drawn carriages and later, automobiles, used the beach as a road. Hug Point, shown above, was one of the trickier spots to get past because of the tide. Even without the ocean to contend with, the rocky terrain would take some skillful driving - for either a car or horse.

Next, it was on to the trailhead. The Oregon Coast Trail travels along the beach from Cannon Beach to Arch Cape, then along a gravel road, under Highway 101 and to one of several suspension bridge crossings of the day. Slippery bridge crossings, I might add. 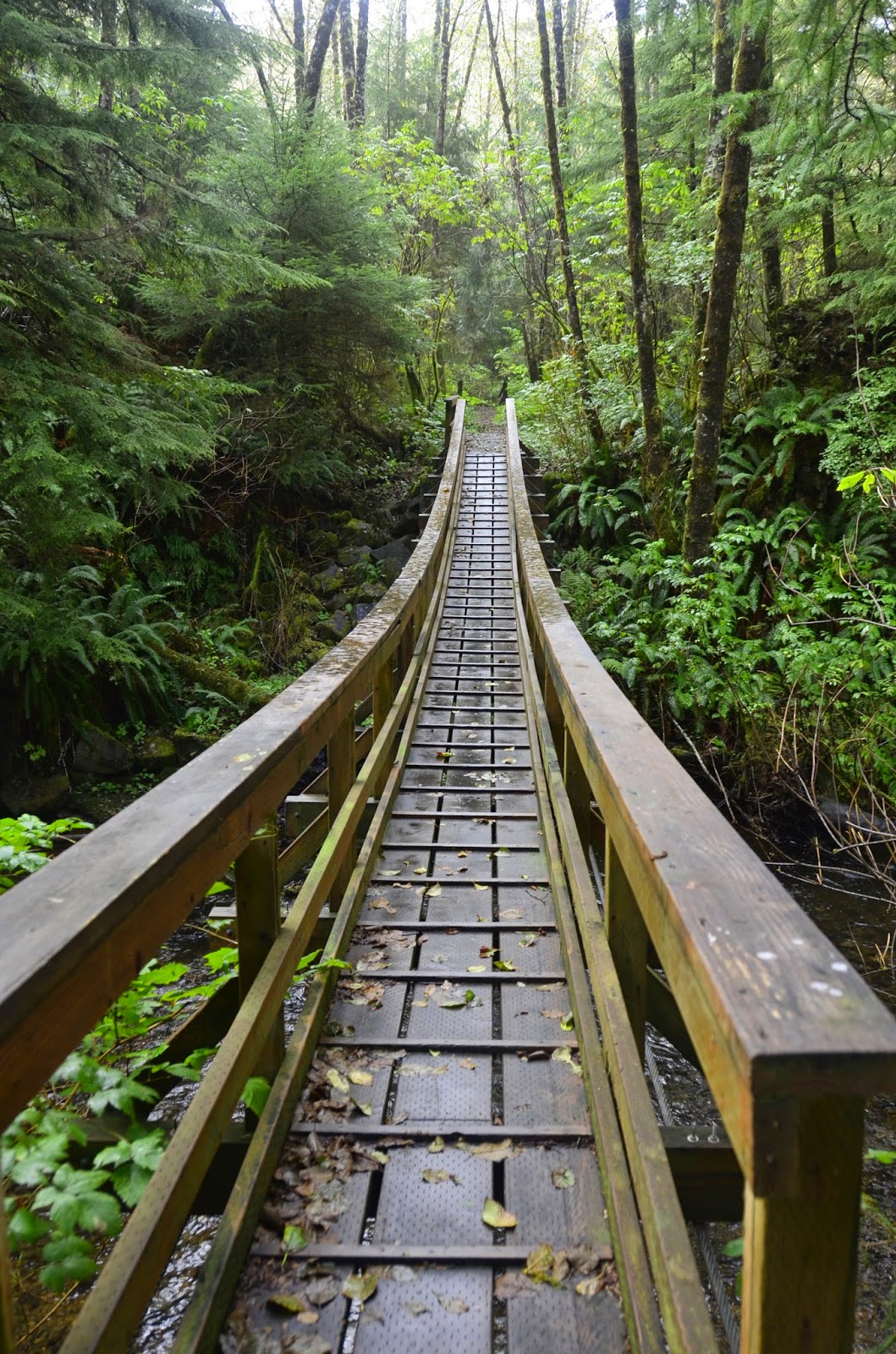 From there it was into the woods with only momentary glimpses of the ocean. The trail descends back to the highway, and picks up about 50 yards south on the other side. If it hadn't been for a small blue and white sign on a post, we would still be looking for it. Here, patches of fog wafted in and out, changing the tone of the forest from the Shire to Fangorn. 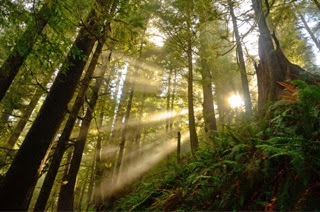 It didn't help that the friend that was with me had encountered a bear and her cubs a number of years back. Fortunately, the only wildlife we encountered were salamanders and slugs. After a while, we began to wonder if perhaps we had both misread the instructions. Supposedly at 2.75 miles there there was an unmarked spur trail leading down to a lookout from jutting rock over the ocean. We kept our eyes open but only came across this "viewpoint" (one that would have been greatly enhanced by one well aimed blow of an ax). 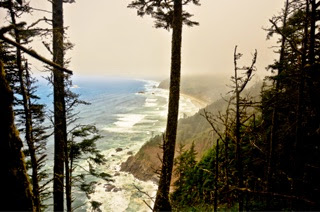 At the time I thought that was all I was going to see of the coastline so took this shot as a sort of consolation prize. As we continued on, and on, the terrain changed from green to burned and stark and then back to green. Perhaps there was a fire through here at one time and this part of the forest represents the boundaries of it. Either way, the scenery changed a number of times and kept things interesting.
Finally, we came to what appeared to be a trail to a viewpoint. We realized later that this was the trail we'd been looking for and that we'd both added up the mileage for the hike incorrectly. Instead of 6.75 total miles, it was more like 9.5-10. Oops. It took a little scrambling, but I felt like getting up early on a Saturday was well worth it. 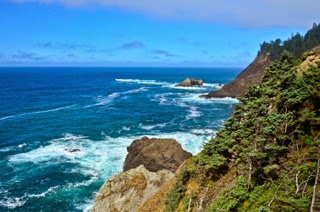 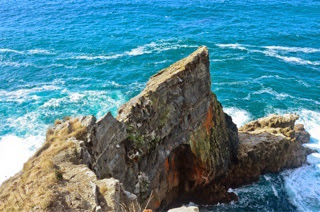 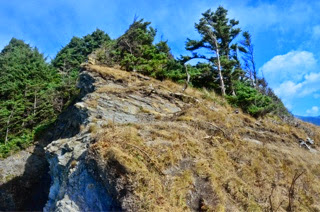 This was the way back up. To any relatives out there reading this, it's not as bad as it looks. From here it was on to Oswald West State Park and then to Highway 101 to the base of Neahkahnie Mountain. The original plan had been to go on to Cape Lookout in Tillamook, but given the misjudging of mileage, it was too late to start on another five mile hike. Guess that means we'll just have to go back to the Coast.